Osaka's Asahi Newspaper security service received martial instruction from Ueshiba (1934-1936), and from Takeda (1936-1939). The leader of the Asahi group of students was Takuma Hisa.

Daitoryu aiki-jujutsu is the historical basis behind many aikido techniques. Understanding where these tehcniques are coming from, will deepen one's understanding of aikido.

1) chrush the opponent down to your feet, avoid throwing him,

2) utilize the power of legs,

3) avoid standing in front of the opponent

Comparing these principles to what Ueshiba is doing in the 1935 Asahi demonstration, the styles are clearly different regarding the first two principles. The third principle seems to be the same.

Yutaka Amatsu (2001) recalls: "After he gave me kyoju dairi Hisa-san taught me, 'As soon as you smash down the enemy kick the enemy’s side or step on his face or stomach then attack joints, this is Takeda’s principle'”.

Yutaka Amatsu (1937-2013) was one of Hisa's most devoted students in the 1960s and 1970s. For most people Hisa taught mainly Ueshiba-ryu, but to Amatsu Hisa taught exclusively Takeda-ryu and Soden. This included volumes 7-9, but also Takeda's versions of volume 1-6 techniques, which were different from Ueshiba's. (Amatsu 2006.) These versions were transmitted from Hisa to Amatsu and onwards to Amatsu's students.

"He taught Ueshiba’s style in his dojo [Kansai Aikido Club] because students were all citizens, whereas he was teaching me Takeda’s because I was a journalist at the Asahi". (Amatsu 2001.)

As for the documentary film (1978) Amatsu was resposnible of choosing which techniques were performed and by whom. Amatsu himself performs techniques from Soden volumes 6 and 7 at timestamp [6:36].

Although being Hisa's natural successor as the head of the Takumakai branch, Amatsu gave up daitoryu in the late 1970s and concentrated on his career as a journalist instead (Amatsu 2006). In his absence the Takumakai much adopted the technical curriculum developed by Sokaku's son, Tokimune Takeda (1916-1993), including the so-called Hiden Mokuroku ("secret syllabus"), which is publicly available. (Cf. Erard 2021.)

After retiring from work, Amatsu went back to Takumakai some 20 years later and started sharing what he had learned from Hisa. Pursuing to preserve Hisa's legacy, Amatsu devoted his final years for teaching Takeda-ryu Soden, and started e.g. visiting Finland on regular basis in 1999.

Erard, Guillaume (2020a) "It ain't necessarily so: Ueshiba Morihei's 'escape from Osaka'".

Li, Christopher (2013a) "Hakaru Mori on the Aiki of Tenouchi". Aikido Sangenkai.

Li, Christopher (2013b) "Hakaru Mori on Kakete and Aiki no Jutsu". Aikido Sangenkai.

Having studied with both, Hisa regarded Ueshiba-ryu and Takeda-ryu as separate styles.

"Ueshiba-ryu is gentle and does not have any dangerous techniques... It's suitable for ordinary people." (Takuma Hisa in Amatsu 2006: 90.) "Takeda-ryu is the real Daitoryu" (ibid. 88).

During the 1920s and 1930s Ueshiba had gradually removed the most dangerous techniques in order to gain his style more popularity, but also due to his religious beliefs of the Omoto sect emphasizing peace and harmony. However paradoxically, Ueshiba regarded his art as martial, which is shown in remarks such as "in actual combat, strike your opponent's face with full force" (Ueshiba in Budo, 1991 [1938]: 43).

Ueshiba also researched Kito-ryu jujutsu and judo techniques in the 1920s and 1930s in order to develop counter-techniques against judo attacks (Shishida 2008). Influences from judo might explain the large circular movements, and also him frequently throwing the opponent away instead of pinning them to the ground. Applying the Kito-ryu/judo principle of hiki-otoshi ("pulling drop"), the attacker's balance is broken before they can get a good grip, and the attacker is thrown away by exploiting the momentum of their attack.

Takeda was Morihei Ueshiba's (1883-1969) teacher, and in 1922 he granted Ueshiba with kyoju dairi "representative instructor" license.

> Article on the relationship between the two men (Erard 2020).

Takeda is said having instructed about 30 000 students. During the 20th century daitoryu inevitably divided into several branches, and some of them differ significantly from others.

> Basic overview of the main branches.

The text below is mainly concerned with Takuma Hisa and Yutaka Amatsu lineage.

In 1959 Hisa established the Kansai Aikido Club, which taught the combined techniques of Ueshiba and Takeda until its closing in 1968. The Takumakai, an organization of daitoryu dojos which developed around Hisa, was created in August 1975.

["Note that unlike in the West, the Japanese can be rather lose with nomenclature and it is not unusual at all to hear older Daito-ryu teachers use the name aikido when referring to their own practice" (Erard 2012).]

Documentary on Daitoryu (1978) produced by the Kobudo Kyokai and the Japanese Ministry of Education.

Ueshiba's demonstration in the film "Budo" (1935), produced by Asahi Newspaper and directed by Takuma Hisa. 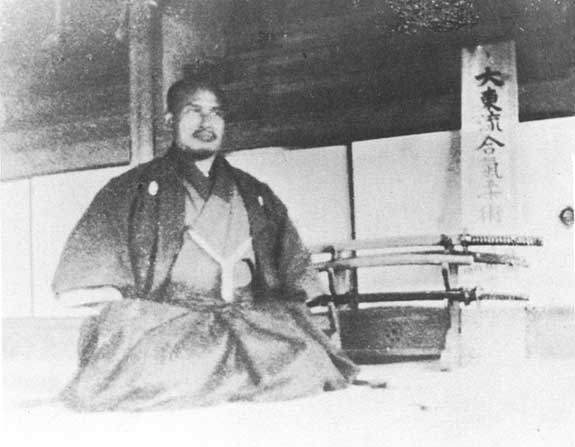 Morihei Ueshiba in front of a placard reading "Daito-ryu Aiki-jujutsu" in the year of receiving Kyoju Dairi (1922). 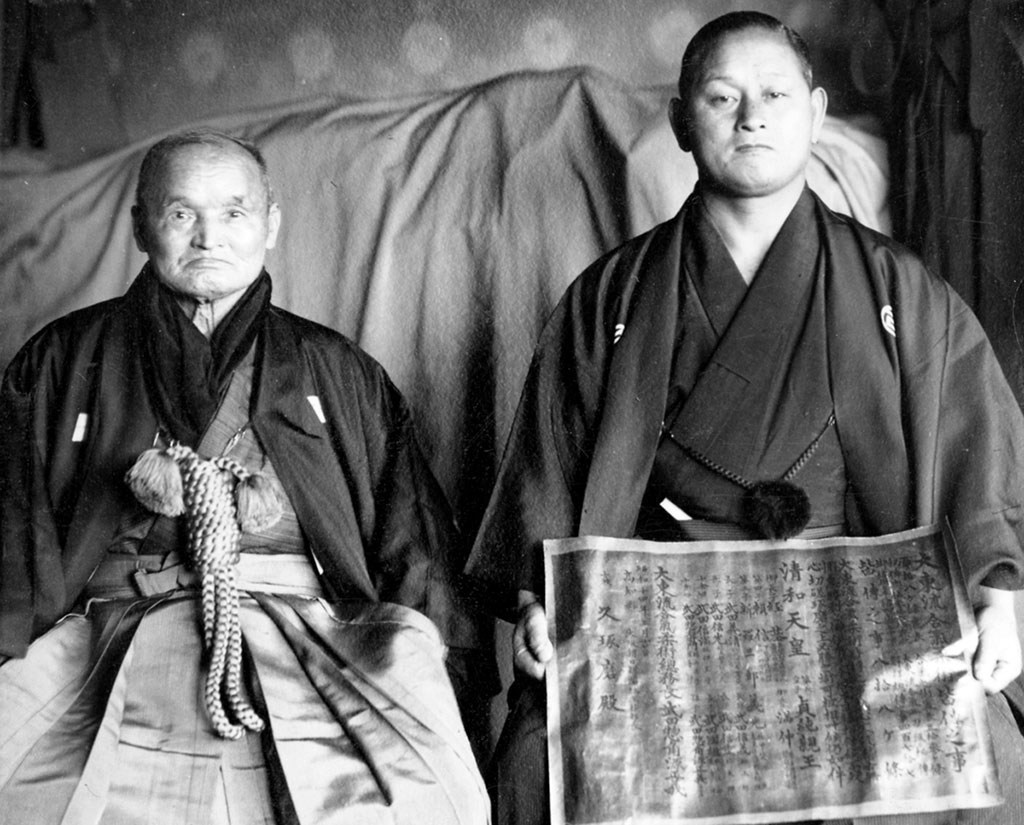 Sokaku Takeda and Takuma Hisa with his Menkyo Kaiden certificate (1939). 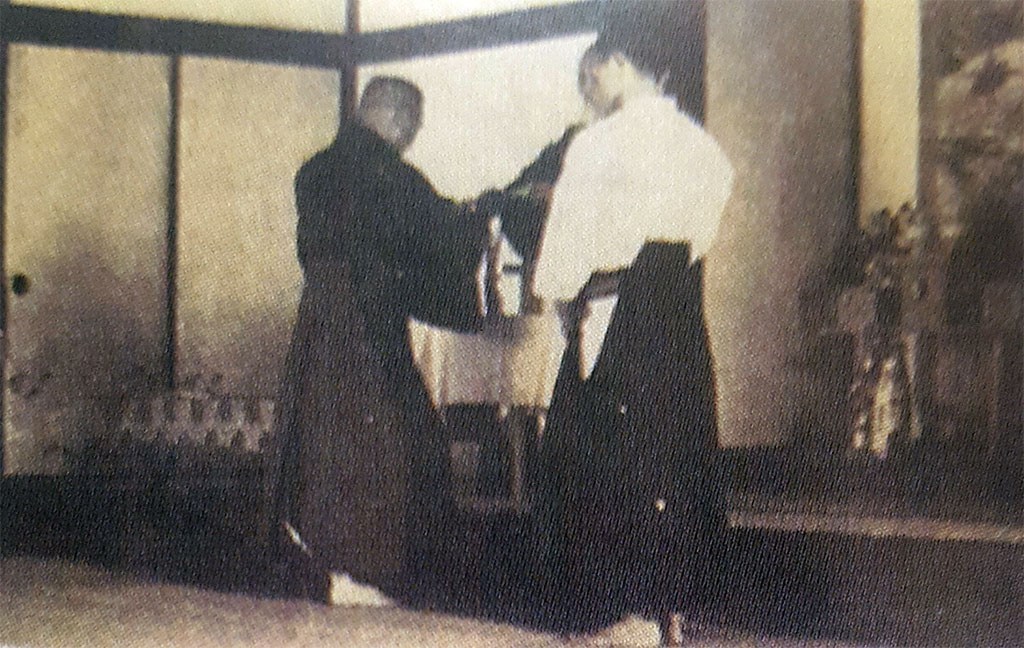 Hisa receiving the Aikido 8th dan from Morihei Ueshiba in the precence of Kisshomaru Ueshiba (1956).

Hisa made important contributions in documenting  techniques. He compiled the nine Soden books (1942-1944), which included most techniques tought to him at the Asahi newspaper by Ueshiba and Takeda during the years 1934-1939.

Soden contains 547 techniques compiled from some 1500 photographs, which were taken secretly without Ueshiba and Takeda's authorization.

Volumes 1-6 of the Soden contain techniques taught by Ueshiba, and volumes 1-5 appear under the title Aikido. Interestingly, "Soden’s publishing coincides with the start of the popularization of Ueshiba’s art under the name aikido, and in particular, its registration in 1942 with the Dai Nippon Butokukai" (Erard 2019a). Volume 6 is entitled Dai Nihon Sogo Budo Asahi Ryu Jujutsu.

There are two additional volumes, which consist of extra material added by Hisa. Book 10 is entitled Aikido Dai-jukkan Keisatsukan Yoto Waza Hitsuto (or, Hogi Hiden) and contains techniques taught to law enforcement officers. Book 11, Aikido Daijuikkan Joshi Goshinjutsu (or, Joshi Budo), shows self-defense techniques for women. (Amatsu 2006, Erard 2019a.) There are no new techniques, but their explanations vary compared to corresponding techniques in volumes 1-9 (Erard 2019a).

Hisa's book Kannagara no Budo (1940) depicts some Soden techniques as thaught by Ueshiba. These have obvious similarities with techniques in Ueshiba's own manuals Budo Renshu (1933) and Aikido Maki no Ichi (1953) published before and after Hisa's book (for download and comparison, see Li 2016 in Aikido Sangenkai, also, see Erard 2019b).

"Hisa also contributed to the pro-military magazine Shin Budo, where he published a series of four articles called “Daito-ryu Aiki-budo” which were published as follows" (Erard 2012):

The material in the last two articles coincides with the "additional" Soden volumes 10 and 11.

Soden in its entirety is still not public.

[See, Erard (2019a) for a more detailed introduction to the Soden. Erard's article is based on a microfilm copy of Soden given to the late Aikido Journal editor Stanley Pranin by Takuma Hisa himself, and later entrusted to Guillaume Erard by the new editor Josh Gold.]

There are few dojos that concentrate exclusively on Soden techniques and Yutaka Amatsu's teachings in their study of daitoryu. One of these is Sasuga Dojo in Finland, which organizes frequent Soden seminars. Other such dojos are located in Ukraine and Norway. 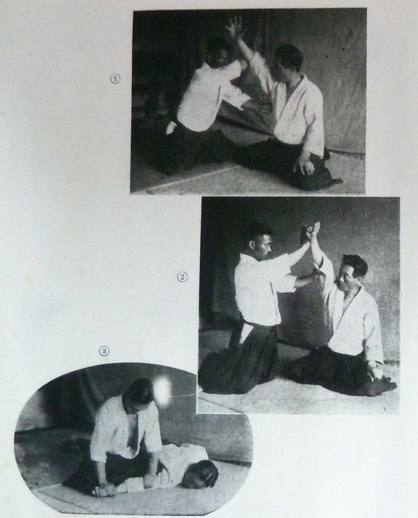 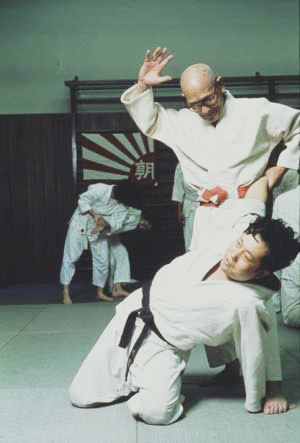 Hiji-nobashi ("elbow extension") is a recurring technical principle in both Takeda-ryu and Ueshiba-ryu. The technique makes the three joints of the opponent's arm rigid at the same time (Li 2013). 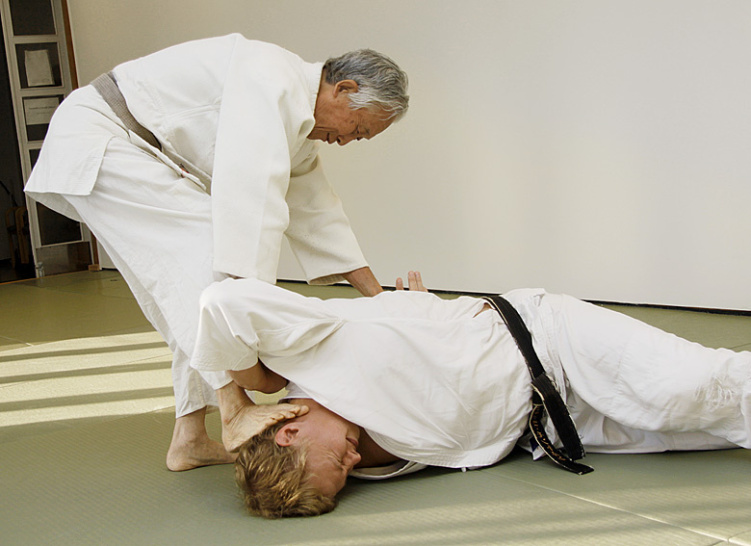